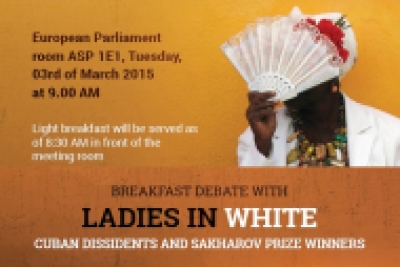 As a Chairman of the Informal Group of Friends of Free Cuba I organized a working breakfast with guests from Cuba to talk about the current situation of the members of the opposition who have been arrested in the last week, mainly the representatives of "Ladies in White". This name refers to the social movement, which has been created in 2004, by the wives of the imprisoned Cuban dissidents. The main guest was Berta Soler, a winner of the Sakharov Prize in 2005 and the chairwoman of "Ladies in White", who in recent days also found herself among the detained dissidents in Cuba. The other Cuban guests included: Elena Larrinaga, a member of "Ladies in White", Alejandro Gonzalez Raga, a former political prisoner Black Spring 2003, Andres Hernandez a vice president of the International Democratic Party (ICD) and Manuel Cuesta Morua, a chairman of the Cuban dissident movement. In addition, a daughter of the Venezuelan, opposition politician, Antonio Ledezma, also attended in the meeting. Mr Antonio Ledezma has been arrested by the authorities for alleged conspiracy against the government. Representatives from Cuba talked about human rights, democracy and the current political situation in Cuba. The Members of European Parliament who participated in the meeting have shown understanding and willingness to engage in dialogue and cooperation in the upcoming months.

"We attach great importance to visa free travel as it allows easier, people-to-people contact, the deepening of cultural ties and political dialogue."