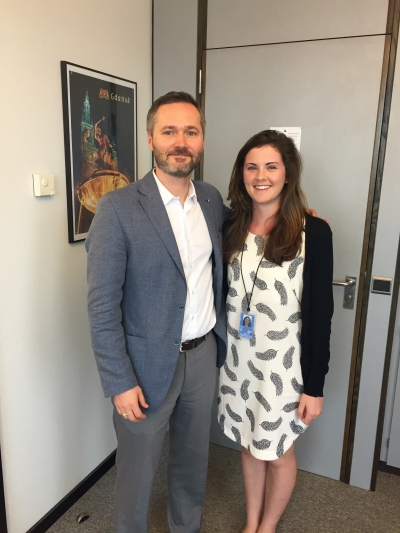 At the European Parliament, being an American is something of an anomaly. Not many people expect a young girl from Indiana to be working for a Polish MEP. Despite the anomaly of my position, the past four weeks working for Mr. Walesa have given me the opportunity to engage in politics at an international scale.

The European Union, as a transnational institution, has set the bar for regional economic, financial, and (to some extent) political cooperation. Though debates rage amongst member nations as to the benefits as belonging to the EU, the very fact that it remains intact despite the various financial crises it has had to face over the past seven years is a testament to its integrity.

As a Political Science major, focusing on international relations, I have been confronted with the harsh reality that crises such as war, economic turmoil, environmental neglect, and political unrest impede not only the local communities directly affected by such atrocities, but also the global community as a whole. With the increasing interconnectedness of state relations, whether through multinational corporations, international institutions, or shared culture, the problems of one community become the problems of all. The European Parliament serves that community, and I was lucky enough to be a part of the process.

Through my work for Mr. Walesa, I have become immersed in a political process that is at once familiar and completely new to me. Committee meetings, briefings on current topics, special events, and current political and global situations combine here to create an ever-changing atmosphere of possibility. Each day in Parliament is different; I have had more new experiences in the space of a morning here than at any other position I have held.

What I have learned most, though, from my time here at Parliament, is the value of discussion. In each committee meeting, in each report, in each statement in plenary, so much time and research goes into making sure that discussion will be fruitful. Parliament is elected to make laws of the people, by the people, and for the people. If communication or debate is flat, nothing will be accomplished.

We all have something to learn or contribute to the debate. I know that the lessons I have learnt over the past month will provide me with invaluable insight to international affairs in the future. I am extremely grateful for the chance to have worked at Parliament and to have worked with such wonderful people.