A year ahead of the next European elections, Members of the EPP Group in the European Parliament will gather in Munich, Germany, from 6 to 8 June 2018 for the Group’s Study Days.

Emily O'Reilly: “Being an ombudsman can seem more like an art than a science” 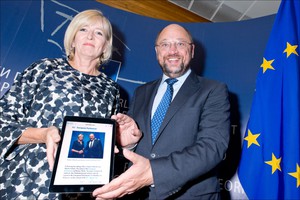 “You have to be able to persuade, coax and cajole sometimes reluctant institutions to change long-standing mind-sets or to be more open in their decision making," said European ombudsman Emily O'Reilly. "This is where being an ombudsman can seem more like an art than a science." Elected by MEPs in July 2013, the former Irish national ombudsman is the first female European ombudsman. We talked to her about her first year in office.