We support the EU-Canada Trade Agreement

The EU-Canada Comprehensive Economic Trade Agreement (CETA) is the outcome of 7 years of negotiations and is ready for the final vote in the European Parliament in Plenary on Wednesday. The EPP Group will support the deal that will save European exporters more than €500 million every year as nearly all import duties between the two countries will be eliminated. It guarantees market access and creates a level playing field for businesses, advances EU agricultural interests by protecting 145 European Geographical Indications and safeguards property rights in an international context, while respecting high environmental, consumer and labour standards. The EPP Group Chairman Manfred Weber and the European Parliament's Rapporteur Artis Pabriks will take the floor during the CETA debate on Wednesday morning.

Future of the EU

The 60th anniversary of the Treaty of Rome, in March this year, is an appropriate moment to reflect on the future of the European Union. The EU and the Member States are facing unprecedented challenges - the refugee crisis, a surge in nationalist and populist parties, foreign policy challenges in the immediate neighbourhood, a lack of competitiveness and a non-functioning internal market. These issues are better tackled collectively than by Member States individually. In line with this, three Reports on how to envision the Future of Europe will be debated in plenary on Tuesday 14 February (voted on Thursday 16 February). Elmar Brok MEP is the Co-Rapporteur of the Report on how to improve the Union within the provisions in the Lisbon Treaty, and Reimer Böge MEP is the Co-Rapporteur of the Report on how to develop the European Monetary Union. The third Report focuses on the institutional set-up of the EU. The EPP Group Chairman Manfred Weber will take the floor on behalf of the Group during the debate.

On Thursday, the European Parliament will vote on two laws which will make Europeans safer. These laws will protect us from EU nationals who travel abroad for terrorism purposes, the so-called foreign fighters. After the Paris attacks, the EPP Group set out to reach ten objectives before the next European elections. With these two laws, we will reach six of the ten objectives. We have made sure that the anti-terror law classifies the planning of terrorist attacks, the travelling abroad for terrorist purposes, providing or receiving training, public incitement or praise of terrorism, and providing or collecting funds to be channelled into terrorist activities, as crimes. With the second law, systematic checks at the external borders, it will be much easier to detect European foreign fighters returning from war zones to cause havoc in European cities. We are delivering on our promises.

MEPs will debate the reform of the European carbon market, the Emissions Trading Scheme (ETS), on Monday. For the EPP Group it is important that a balanced outcome of the reform of the ETS is achieved ensuring that climate policy in the EU goes hand-in-hand with the protection and creation of jobs. The EPP Group Spokesman on this issue, Ivo Belet MEP, stresses the need to avoid 'carbon and investment leakage', the phenomenon whereby energy-demanding industries and companies move their production facilities or future investments to non-EU countries with less ambitious climate legislation.

On Tuesday, MEPs will discuss the deteriorating situation in Ukraine, including the ongoing fighting in the city of Avdiivka and the very difficult humanitarian situation of some 16,000 citizens living there. The EPP Group believes that the fighting in Avdiivka is part of Russia’s aggressive actions towards Ukraine which should be strongly condemned. We also note the dramatic situation of prisoners of war, we demand their immediate release and note with concern the deteriorating human rights situation in Crimea.

On Wednesday, the European Parliament will debate a Resolution on civil law rules on robotics. It is the first time that MEPs have striven to set up a legal framework defining the use of AI and robotics. The goal is to find a common EU approach to this fast-developing field and to define the civil law framework that would not create hindrances to innovation, and which will set worldwide standards touching upon the issues of liability, security and research, not omitting ethical principles.

The European Parliament will call to improve the impact of European investment on jobs and growth by accelerating the uptake of regional funds and simplifying the rules on Wednesday. After the crisis, EU funds have become increasingly important for public spending in some Member States. Better targeting and easier access should therfore maximise the impact on job creation and economic growth. Better communication of European investment should also increase visibility of succesful projects that postively affect the regions and lives of Europeans.

During the joint debate on the coordination of the 'European Semester' economic policy on Tuesday, the EPP Group will stress that the rules of the Stability and Growth Pact must be respected. Parliament's Rapporteur Gunnar Hökmark welcomes the Communication from the European Commission and outlines the EPP Group's priorities: “Europe needs more investment and structural reform. But to achieve this, we need to ensure the credibility and stability of the European economy.”

On Thursday, the European Parliament will vote on an Aviation Strategy for Europe, with the aim of addressing challenges in the sector while reinforcing Europe's position as a global leader in aviation. In order to better manage flight traffic, the Motorway of the Sky concept proposes dedicated flight paths to organise air traffic in the event of disruptions to airspace. Other key areas such as the importance of efficiency in service provision, smart investments and delivering on environmental objectives are highlighted in the Report.

Tuesday @18.00            Frank Engel MEP and Ruben Melikyan on the implications for human rights of the Nagorno-Karabakh conflict

MFF: we are ready for negotiations

The European Parliament’s Budgets Committee today voted on the next EU long-term budget. The draft interim Report is on the Multiannual Financial Framework (MFF) 2021-2027 and own resources, setting the levels and priorities of the EU budgets for the next seven years.

“No Compromise with Iran on Human Rights” 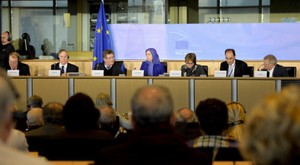 On the invitation of the Friends of a Free Iran in the European Parliament (FOFI), a conference was held on the International Human Rights Day, 10 December, chaired by MEP Gérard Deprez with the participation of dozens of members of European Parliament from various political groups.