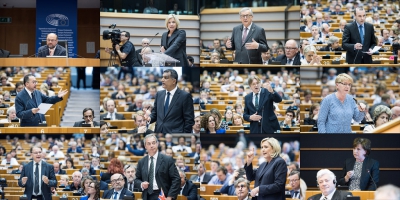 "It will be in the interest of us all to ensure that a future relationship will be constructive and mutually beneficial.  No-one will benefit from a prolonged period of political limbo", said Dutch minister Jeanine HENNIS-PLASSCHAERT, representing the EU’s rotating presidency. "At the same time, we should allow the UK the time it needs to recuperate and take the necessary decisions. Now, a part of Europe's challenge is to convince citizens that unity remains the best choice. The fact that fragmentation is no longer unthinkable, should gravely concern us all", she added.

“We must respect the will of the British people”, said European Commission President Jean-Claude JUNCKER, and “there must be consequences”. He asked the British government to “clarify” the situation as soon as possible, so as to prevent uncertainty. “No notification, no negotiations”, he said, insisting that there would be no secret or informal talks with London. To UKIP leader Nigel Farage, he said, “you are fighting for the exit, the British people voted for the exit, so why are you here?"

“We won’t leave you on your own”, EPP group leader Manfred WEBER (DE) promised Britain’s youth, more than 73% of whom voted “remain.” Populists had won the referendum, he said, adding “shame on you” to Nigel Farage, whom he called a “liar” in a reference to allegedly false campaign claims. “We now expect an Article 50 notification and swift and fair exit negotiations”, he insisted, adding that “the times of appeasement are over” and urging politicians to stop “bashing Brussels” and take responsibility.

“The European Union cannot become a hostage to the internal party politics of the Conservatives. The British authorities have to notify us as soon as possible of the United Kingdom’s desire to leave, said S&D group leaderGianni PITTELLA (IT).  “Today I say clearly that our group will oppose with all its strength the translation of the ‘Fiscal Compact’ into EU law. Budgetary flexibility is good, but we have to go further to encourage public and private investments. Either Europe provides answers to these questions or sooner or later it will be swept away”, he added.

Now that the British people have spoken, it is time to look to the future and stop replaying the past, said ECR group leader Syed KAMALL (UK). The EU treaties are clear and they must be respected, he added, calling for clarity about the timetable for the withdrawal negotiations. Britain and the EU must remain close partners for years to come and Britons must become “good neighbours and not reluctant tenants”, he said.

“It’s hard to accept a decision you disagree with”, but the UK’s choice must be respected, said ALDE group leader Guy VERHOFSTADT (BE). However, the way in which the Leave campaign succeeded, with posters like Nazi propaganda and lies that created a climate of fear and negativism. Continuing today’s uncertainty would make things worse. “Only triggering Article 50 immediately can stop this - 27 member states should not wait for a disorientated Tory party to get its act together”, he said.

GUE/NGL leader Gabriele ZIMMER (DE) said her group could not agree with the resolution tabled by most groups because it lacked self-criticism. The financial crisis, the “brutal treatment" of Greece, Italy and other countries had left bad memories with EU citizens, and it was precisely those in Britain who feared for their jobs, healthcare and pensions, who voted to leave, she said, adding that “the EU has not shown it can protect its citizens against the risks of globalisation.”

"Today, there is a possibility to put forward a new project, but do not be surprised if between Denmark, Ireland and all way to Greece, there is a lot of suspicion", said Philippe LAMBERTS (BE) on behalf of the Greens/EFA group. "We need to link up to the roots of the European project and deliver peace and sustainable prosperity. Is it possible that we ensure human dignity for all human beings, inside and outside the EU? Our answer is yes!", he concluded.

Following a call of order by the president to calm the chamber to allow for the next speaker to be heard, EFDD leader Nigel FARAGE (UK) noted that those who had laughed at him 17 years ago, when he arrived in Parliament announcing a campaign to leave the EU, were not laughing now. “You, as a political project, are in denial”, he said, predicting that the UK would not be the last member state to leave the Union. He warned that if the EU were to reject “a sensible trade deal”, then the consequences would be far worse for the 27 than for the UK. “Even no deal is better for the UK than the rotten deal we have now”, he said.

ENF leader Marine LE PEN (FR) called the UK vote the “by far the most important historic event since the fall of the Berlin wall” and an outcry of love of the British people for their country. It was a slap in the face for “EU supporters” and showed that the EU project is not irreversible, she added. Delaying implementation of the decision would not be democratic, she warned.

Non-attached member Diane DODDS (UK) said that the decision of the people of the UK “cannot be rewritten”. She accused EU leaders of having “turned a deaf ear” to the frustrations that British people have voiced “for years - but today you are listening”, she added. She nonetheless said that Britain “had not turned its back on Europe.”

Replying to MEPs’ comments, Ms Jeanine  HENNIS-PLASSCHAERT said: “At this stage, the answer is not more or less Europe, but it is a better Europe. It is clear that we have to act. Our Union only exists if it is supported by the millions of citizens and that support cannot be taken for granted. The common challenges we all face will not disappear and no country on the face of the earth can face these challenges alone”.

Jean-Claude JUNCKER underlined that the Commission was not to blame for the referendum result. He pointed out that the UK had not voted on austerity policies or the adequacy of protection of the EU’s external borders, because it belongs neither to the euro nor to the Schengen Area. He too accused Mr Farage of lying: “you fabricated reality”, he said.

Diane DODDS underlined that the tone of the debate had “reinforced all the stereotypes that the British people fear about Europe”. “Threats and bullying will not work”, she said, urging the UK and the EU to now build a relationship leading to prosperous economies and peace in an “increasingly dangerous” world.

Marcel DE GRAAFF (ENF, NL) said that 23 June had been a fantastic day of liberation for the UK people and the beginning of the end of a misconceived project. He asked for Mr Juncker and the whole of the Commission to step down. The dismantling process must start as quickly as possible and economic and political integration must stop, he added.

For Nigel FARAGE, things in the UK “are looking pretty good” after the referendum, there is only some political upheaval, namely the resignation of the Prime Minister and the British Commissioner, “for the right reason”, he noted. If the vote sweeps some of the British political class, “so be it”, Farage said, adding that he looks forward to celebrating next year “Independence day” on 23 June.

Alyn SMITH (Greens/UK): We are proudly Scottish, and I am proudly European. I want my country to be internationalists, cooperative, ecological, fair - European. And the people of Scotland, along with the people of Northern Ireland and people of London and lots of people from Wales and England, voted to remain within our family of nations. I demand that this status be respected. We will need cool heads and warm hearts. But please remember this: Scotland did not let you down. Please, I beg you, chers collègues, do not let Scotland down now! (Standing applause in the chamber)

Martina ANDERSON (GUE/NGL, UK) said: “We in the North of Ireland are not bound by the UK vote. We respect and will stand by the votes of North Ireland, who just like Scotland voted to remain. The last thing the people of Northern Ireland need is a new border with 27 member states!”

Mr VERHOFSTADT appealed to fellow MEPs to send a strong message to the European Council and “vote massively the resolution we have prepared”. Addressing UKIP’s Nigel Farage, he said: “Finally we are going to get rid of the biggest waste in the EU Budget, which we have paid for 17 years, your salary!”

Rzsyard Antoni LEGUTKO (ECR, PL) said that “this is the worst thing ever happened in the history of European integration. We have to reflect on how to correct this, Commission as well as Parliament. The picture is not rosy at all, he said, wondering whether EU leaders would be able to learn from mistakes.

Mr PITTELLA told Mr Farage “I must say one thing: you have not done the best for your country and history will demonstrate that. This is no time for polemics, this is an historic event and we need clarity. Did we get clarity from the Brexit side? You have to draw your conclusion and notify the decision. We have got clear ideas on what to do in the short and mid-term to salvage Europe”, he concluded.

Mr WEBER said in conclusion that the debate had made clear two things: The “challenge we are facing” and that the European Parliament supports the European project. He urged the European Council not to get bogged down in internal disputes tomorrow but to send a strong signal

The countdown has begun: 100 days until the European elections

The European elections are only 100 days away.