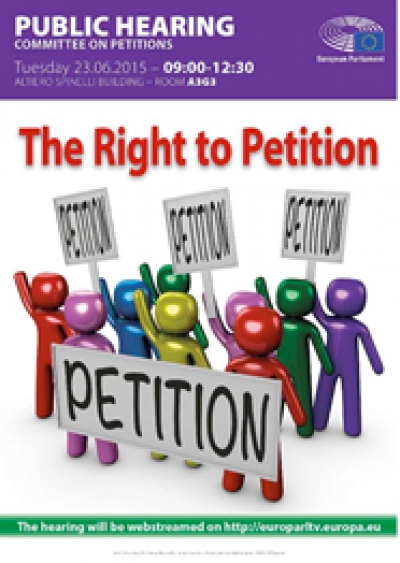 The theme of the meeting revolved around two major issues: the petition as a fundamental right and the impact of the Petitions Committee on European law, with particular emphasis on e-petitions and e-democracy.

It's important to remember that petitions are one of the primary ways for citizens to directly interact with the EU institutions on the matters that affect them and come within the European Union's field of activity. The Petitions Committee strives to be a communication channel for citizens to resolve the systemic problems they encountered within Member States. This debate, moderated by the Chair of the Petitions Committee, Mrs. Cecilia Wikström, and with the contribution from representatives from the scientific and legal fields, EU institutions leaders, Member State's authorities, and national ombudsmen, was a great platform to share our experiences. Together, we attempted to answer the questions: how vital petitions are to the activity of democracy and how citizens via petitions can also be a part of the legislative and policy-making processes.

Although all participants agreed that the right to petition is a fundamental right of citizens and acts as an invaluable tool of participatory democracy, the further improvement of the procedure was stressed as a future necessity and challenge. For this reason, the first discussion focused on the legal criteria for the admissibility of petitions. Bearing in mind that Committee on Petitions is currently trying to encourage more citizens to make use of their right to petition, there has been some confusion and frustration on both the part of citizens and on the part of the Committee regarding admissibility. In order to improve the status quo, recommendations were made to clearly outline the legal criteria of petitions for citizens and to enhance cooperation and communication between the EU Parliament, the Commission, national parliaments, the EU Ombudsman, and the citizens.

The second panel focused on the Impact of the Petitions Committee on European law and policy making. Panellists, representing EU law-making bodies, such as the Commission and Parliament, and representatives from civil society, including Mr Francisco Polo, representative of the Internet petition platform http://Change.org, focused discussion on the changing perceptions of participatory democracy. The omnipresence of the internet combined with the complexity of the European system led to high expectations on both the government and the citizens' part. It was stated that the decrease in petitions submitted by citizens could be a consequence of a lack of results expected.

This fruitful hearing has reinforced again my belief that we can learn a lot by engaging in dialogue and exchanging our experiences in order to improve and make a positive change. I am hopeful that in the future, the right to petition will not only be a tool used by those who know of it, but a fundamental right enjoyed by all who seek to improve the governance of the EU.

PECH Newsletter: Trawler – January 2019 prepared by the Secretariat of the Committee on Fisheries.