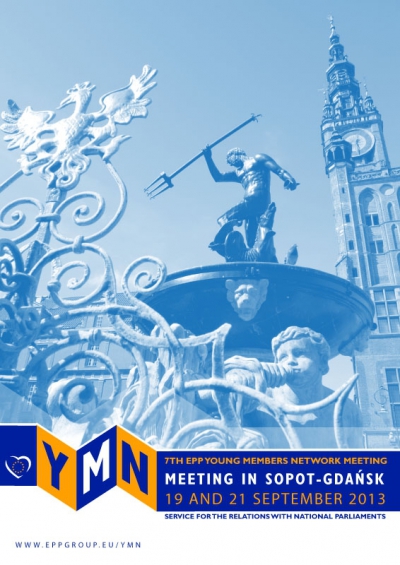 On the 19th through the 21st of September 2013, I had the pleasure of being a host of a very interesting event, which took place in Gdansk and Sopot.

For those three days the members of the Young Members Network, the young parliamentarians affiliated with the European People's Party bringing together Civic Platform and sister parties in other countries came to the Tri-city. It was the seventh annual meeting of this unique platform for closer cooperation between national parliaments and the European Parliament, and the exchange of experiences between parliamentarians from different countries.

The first of the planned panels was held on cohesion policy and structural investments, we had special guests: Minister of the Regional Development Ms. Elżbieta Bieńkowska and undersecretary of state in the Ministry of Regional Development Mr. Paweł Orłowski, we discussed the great importance of financial support for regions that help to create jobs and reduces disparities. The discussion was moderated by Mr Jan Olbrycht, MEP.

The second day began with a meeting with President Lech Wałęsa, the main topic of the panel was third generation human rights, but there was also time to tell the guests from abroad about the importance of the Solidarity movement in overthrowing communism in Europe. After the meeting everyone wanted to find out for themselves what it was really like to live under the communist regime, so we visited the exhibition "Roads to Freedom" and on our way we also saw the construction site of the European Solidarity Centre.

In the afternoon another panel was held, this time on maritime policy and the future of the shipbuilding industry, and it could not take place anywhere else but in the legendary Gdansk Shipyard.

On the last day, just before the departure we have met for breakfast with the young Civic Platform activists. This was a unique opportunity for young people interested in politics, to personally meet MPs, who often had started their careers in political youth organisations, inspired each other and exchanged experiences. I hope that all the participants of this three-day meeting were enriched with new knowledge and ideas, as this unique platform provides a unique opportunity to learn, discuss and develop new solutions for a better Europe.

"To safeguard the free and rules-based trading system we stand for, we have amended the current anti-dumping and anti-subsidies regulations to become more suitable to today's global trading environment.

MFF: we are ready for negotiations

The European Parliament’s Budgets Committee today voted on the next EU long-term budget. The draft interim Report is on the Multiannual Financial Framework (MFF) 2021-2027 and own resources, setting the levels and priorities of the EU budgets for the next seven years.