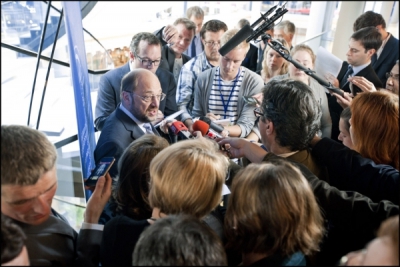 Drastic cuts in the EU's budget for 2014-2020 could paralyse it for a decade. That is the warning MEPs will give to EU leaders in a debate on Wednesday 21 November with Commission president Barroso and Cypriot deputy minister for European affairs, not to let "net payer" member states talk them into striking a bad deal at the EU summit on 22 and 23 November. If need be, Parliament can veto the long-term budget.

Parliament will adopt its guiding principles for a future Economic and Monetary Union (EMU) on Tuesday 20 November. These feature accountability rules to match transfers of powers to EU level. MEPs will also point out that reforms, such as improving tax co-ordination, can start now without changing basic EU rules.

Budget 2013: EP to debate how to break budget deadlock

MEPs will look for ways to break the EU budget deadlock in a debate with the Cyprus presidency and the Commission on Wednesday 21 November. The Commission must table a new draft budget for 2013, because the Council and Parliament failed to agree on one before the 13 November deadline. Meanwhile, some EU programmes are still stuck because funds dried up and the Commission can no longer pay the bills.

MEPs to push for safer and greener motorbikes

MEPs will discuss more stringent safety and emission standards for future mopeds, scooters, motorbikes, all-terrain vehicles and quads, which currently account for only 2% of traffic, but 16 % of fatal accidents, on Europe's roads. On Tuesday 20 November  they will also vote on new rules, agreed with the Council. Manufacturers will benefit too, as there will be one new regulation replacing the existing 15 directives.

The European Parliament will vote on the nomination of Malta's Commissioner-designate, Tonio Borg, on Wednesday 21 November. Mr Borg was nominated by the Maltese government to take over the portfolio of health and consumer policy after the resignation of John Dalli.

Member states should have the choice on whether to exploit shale gas but national and EU legislation must be sufficiently strict, for example on extraction through "fracking", to avoid harming the environment. This is the view of Parliament's industry and environment committees, whose separate draft resolutions will be put to the vote on Wednesday 21 November.

Protecting children on the internet

Children must be able to use the internet in a critical and informed manner and in total safety, say MEPs in a resolution to be voted on Tuesday 20 November. Fighting illegal and harmful content must have priority and more efforts are needed to withdraw illegal or unsuitable content. The House will call on member states and the Commission to develop a common approach towards child safety online.

Michel Martelly, president of Haiti since May 2011, will deliver a formal address to the European Parliament on Tuesday 20 November at noon.

Less than two years from now, EU citizens will be asked to elect their members of the European Parliament. Ideas for boosting voter turnout and improving political legitimacy will be debated with the Council and Commission and set out in a resolution to be voted on Thursday 22 November.

Winner of 2012 LUX Prize to be announced on Wednesday

President Martin Schulz will announce the winner of the 2012 Lux Prize film competition at a formal ceremony in the chamber on Wednesday 21 November in Strasbourg,

EU aid worth €670 million for earthquake victims in Italy

Card payments should be secure and cheaper across the EU

MEPs can put an end to shark-finning

Muscle up security and defence policy or face decline

How to stop unfair trade competition from China?

Doha summit must be springboard for more climate action

MEPs to discuss situation in Gaza