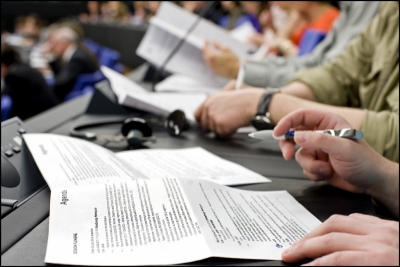 Parliament will cap bankers' bonuses, step up bank capital requirements and make it easier for banks to lend to small firms in a banking reform package to be voted on Tuesday 16 April.

ECB's crisis management to be discussed with Mario Draghi

MEPs will debate the European Central Bank's past and future activities with its president Mario Draghi on Tuesday 16 April at 15.00 CET. Cheap ECB loans to banks must be conditional, to ensure that they pass the funds on to the real economy and the ECB itself must be made more transparent and accountable, says a draft resolution to be voted on Wednesday 17 April.

MEPs will quiz Olli Rehn, the commissioner responsible for economic affairs, and Lucinda Creighton, the Irish minister for European affairs, on Wednesday 17 April about how the recent programme of financial assistance to Cyprus was handled. They are set to seek clarifications over the total rescue package's actual amount and Cyprus' own contributions.

A proposed freeze on auctions of a portion of CO2 emission quotas, aimed at boosting the very low price of "polluter's permits" in the EU, will be put to a vote on Tuesday 16 April. The proposal aims to restore the incentive effect of the Emission Trading Scheme (ETS) and to encourage companies to invest in green technologies. MEPs will also vote on an agreement with the Council to temporarily exclude intercontinental flights from the ETS.

Parliament will debate the constitutional situation in Hungary with the Council and Commission on Wednesday 17 April. This follows the recent adoption of a set of amendments to Hungary's basic law by the Hungarian parliament. The EP's civil liberties committee is checking whether these changes respect EU law.

The EP will have its final say on Tuesday 16 April on proposals to open up groundhandling services at major EU airports to more competition. The transport committee voted narrowly in favour of further liberalising ground handling services and inserted requirements for minimum quality standards, as well as measures to safeguard working conditions. The full House will vote without debate.

Finnish prime minister Jyrki Katainen will visit the European Parliament in Strasbourg on Tuesday 16 April. He will debate the European Union's future with political group leaders, starting at 10.30 CET. Mr Katainen's was invited by EP president Martin Schulz and they are both expected to hold a press conference after the debate.

Irish president Michael D. Higgins will deliver a formal address to MEPs on Wednesday at noon. Ireland holds the EU Council's rotating presidency until the end of June this year.

How to calculate the population of an EU member state

A new legislative proposal laying down common rules for compiling population statistics in the EU will be voted on Thursday 18 April. The data gathered will be used among others to calculate qualified majority voting rights in the Council and entitlements to some EU funding.

Assessing the first year of the European Citizens' Initiative

Since April 2012, EU citizens can take part in shaping EU policy through the European citizens' initiative. MEPs will assess with the Commission on Thursday 18 April the experiences and problems encountered in the first year of this new tool, which allows one million citizens from at least seven EU countries to ask the Commission to propose new laws.

Enlargement: Serbia, Kosovo, Montenegro and Turkey in the spotlight

Parliament to approve first discard ban in the EU