President Tajani paid tribute to the Mayor of Gdansk, Paweł Adamowicz, who has died following a violent attack on Sunday.

The President also remembered those who lost their lives to a terrorist attack in Strasbourg in December, including the journalists Antonio Megalizzi and Barto Pedro Orent-Niedzielski.

Listing several violent attacks in many member states, President Tajani appealed for open debate not to degenerate, as verbal and physical violence go hand in hand. The President informed the House that he planned to discuss with the mayor of Strasbourg how to pay tribute to the victims of the attack. He will propose to the EP’s Vice-Presidents and quaestors that the EP should name its radio studio after the two journalists killed in December.

Changes to the agenda

The Council and Commission statements on the “Conclusions of the European Council meeting of 13 and 14 December 2018” will be taken off the agenda. As a consequence, the sitting should start at 09:00.

Requests by committees to start negotiations with Council and Commission

Decisions by several committees to enter into inter-institutional negotiations (Rule 69c) are published on the plenary website.

If no request for a vote in Parliament on the decision to enter into negotiations is made by Tuesday 12.00 midnight, the committees may start negotiations. 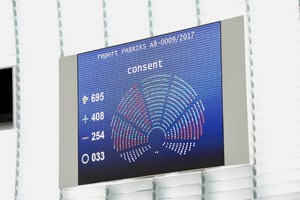