This will be the thirteenth in a series of future of Europe debates between EU heads of state or government and MEPs, following on from

President of the Republic of Cyprus Nicos Anastasiades will address MEPs at the December plenary session in Strasbourg.

MEPs will vote on new time limits and conditions for internal border checks within the Schengen area on Thursday.

The Schengen Borders Code, currently under revision, allows member states to carry out temporary checks at internal borders within the Schengen area, in the event of a serious threat to public order or to internal security.

The vote will establish Parliament’s position for negotiating with the Council on the time limit for the initial period of border checks, the maximum time limit of the border checks and the safeguards needed for extensions.

EU enlargement: MEPs to review Western Balkans progress made in 2018

MEPs will discuss on Wednesday and vote on Thursday on the progress made in 2018 by five Western Balkan countries towards possible EU accession.

The European Parliament will assess the ongoing situation in Serbia, Kosovo, the former Yugoslav Republic of Macedonia, Albania and Montenegro.

Out of these five countries, Serbia and Montenegro are currently conducting accession negotiations with the EU, while the Council is set to open similar talks with Albania and the former Yugoslav Republic of Macedonia in June 2019.

The first meeting of the EU-Kosovo Stabilisation and Association Council took place in October 2016, but Kosovo has not yet received EU candidate status. Five EU countries (Spain, Slovakia, Cyprus, Romania and Greece) still do not recognise it as a sovereign independent state.

MEPs will debate the latest developments with EU Commissioner for enlargement Johannes Hahn (tbc) during the mini plenary session in Brussels on Wednesday, followed by votes on resolutions on Thursday.

A bank-led fraud scandal that amounted to a loss in tax revenue of over 55 billion euros, in at least 11 countries, will be the subject of a resolution to be adopted on Thursday.

The resolution is expected to express MEPs’ outrage at the inadequate automatic exchange of information between tax authorities and their inability to sniff out fraud, and will call for European action on a problem which is ever more European, not national.

The fraud, uncovered in 2012, initially thought to have only affected Germany, is now estimated by an investigative journalist consortium to have been at least ten times more costly than originally thought, as it has affected treasuries from the following 11 countries: Germany, Belgium, France, Spain, Italy, the Netherlands, Denmark, Austria, Finland, Norway and Switzerland. The fraud revolved around banks facilitating the buying and then reselling of shares belonging to foreign investors on the dividend pay-out day. The speed with which these transactions were carried out and the lack of communication between authorities meant that tax administrations struggled to identify the shares’ real owners. This then exposed the authorities to fraudulent claims, for tax refunds from foreign persons who pretended to have paid a dividend tax, which, as foreigners with a fictitious proof of having paid tax elsewhere, they could recover. Often, tax authorities reimbursed an unpaid tax many times over.

Climate change: Commission to present its long-term strategy to Parliament

MEPs will discuss with the European Commission on Wednesday its strategy for net-zero emissions by 2050, published the same day, ahead of climate talks in Katowice.

The existing EU low-carbon economy roadmap suggests that by 2050, the EU should cut its greenhouse gas emissions to 80% below 1990 levels through domestic reductions alone.

In its resolution adopted in October, Parliament called on the Commission to prepare, by the end of 2018, an ambitious mid-century zero emissions strategy, providing a cost-efficient pathway towards reaching the net-zero emissions goal adopted in the Paris Agreement and a net-zero carbon economy in the European Union by 2050 at the latest.

Parliament also supports an update of the European Union’s nationally determined contributions, with an economy-wide target of 55 % domestic greenhouse gas emission reductions by 2030 compared with 1990 levels.

Plans for a future-proof single market

Measures to eliminate remaining barriers and seize new opportunities in the single market to benefit citizens and businesses will be discussed with the Commission on Wednesday.

MEPs will react to the state of play on remaining barriers and opportunities in the single market presented by the European Commission on 22 November 2018, and on its call for key proposals to be swiftly adopted before the end of this legislature, including laws on the Digital Single Market, sustainable energy and the Capital Markets Union.

Lawmakers will assess options for action to ensure that Europe makes the most of the new opportunities of a changing global environment.

This debate will feed into a resolution to be put to the vote during December’s plenary session.

At the European Council on 13-14 December 2018, EU leaders will review the state of play regarding a fully functioning single market.

2018 marks the 25th anniversary of the EU’s single market, which accounts for a fifth of the world’s economy.

MEPs to push for improving the situation of women with disabilities

MEPs will urge the Commission and member states to take measures to strengthen the rights of women with disabilities, in a debate followed by a vote on Thursday.

In the draft resolution, MEPs call on member states to fulfill their commitments regarding the UN Convention on the rights of persons with disabilities, which has been ratified by the EU and all individual member states, and urges in particular the Commission and EU countries to take measures to improve the situation of women with disabilities, in several areas such as rights, accessibility, education, health, gender-based violence, digital and media inclusion.

MEPs will also call for the barriers which are obstructing people with disabilities from their right to vote to be removed in the run up to the European elections, in six months.

There are around 46 million women and girls with disabilities in the EU, representing about 16% of its total female population. Women with disabilities are two to five times more likely to be victims of violence than other women, and 34% of women with a health problem or a disability have experienced physical or sexual violence by a partner in their lifetime.

Procedure: Oral question to the Commission, with resolution

The rules and processes of the WTO urgently need to be modernised to keep the body relevant, say MEPs in a resolution up for debate Wednesday and a vote on Thursday.

Citing the current crisis affecting the organisation, the resolution is set to take a stand in favour of a free, fair, rules-based and multilateral trading order that supports social, environmental and human rights, and contributes to peace and security.

It lists a series of reforms needed to keep the body relevant and efficient, including extending the scope of its oversight, allowing flexibility in taking common action, and revisiting the developing-developed country classification.

Parliament is set to approve EU aid worth €2,308,500 to help media workers made redundant in the Greek region of Attica to find new jobs.

The aid will be used to fund a series of measures co-financed by the European Globalisation Adjustment Fund (EGF). These measures will help the 550 workers to find new jobs by providing them with occupational guidance, training, retraining and vocational training, specific advice geared towards entrepreneurship, contributions to business start-ups and a variety of allowances. All the redundant workers are expected to be included in the measures.

Greece argues that the steady decline in the sector is the consequence of the global economic and financial crisis, which still affects the Greek economy (decline in per capita real GDP, rising unemployment, decreasing salaries and reduced household income etc.), coupled with the rapid digital evolution, which is transforming the publishing sector.

All the redundancies occurred in Attica, which accounts for 35% of total Greek unemployment and for 36% of long-term unemployment. In total, 15% of the workers made redundant are over 55 years old, and 42% are women, says the draft report by Eider Gardiazabal Rubial (S&D, ES). They were employed by the three enterprises “Lambrakis Press SA (DOL)”, “Ethnos Publications SA” and “Pegasus Magazines Publications”.

MEPs are set to sound the alarm over the controversial role of the German Youth Welfare Office (Jugendamt), denounced in a large number of petitions by non-German parents.

Following the plenary debate on 15 November, Parliament will now vote on a resolution highlighting the very large number of petitions received by the European Parliament from non-German parents over the past 10 years regarding the role of the German Youth Welfare Office. The petitioners denounce alleged discrimination and arbitrary measures taken against them in cross-border family disputes involving children, as well as insufficient counselling and legal support provided by their national authorities. 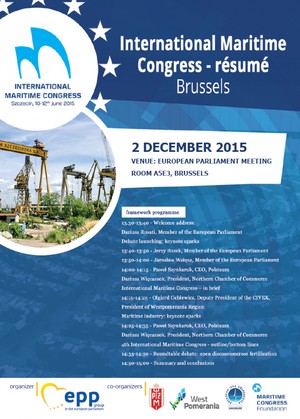 Last Wednesday (2 December 2015) I was invited to give a speech on the resume of International Maritime Congress.