"This is a big step for public health. We will reduce the consumption of antibiotics in farm animals, which are an important source of antibiotic resistance then transmitted to humans. Antibiotic resistance is a real Sword of Damocles, which threatens to send our health system back to the Middle Ages", said Françoise Grossetête MEP, author of the new Veterinary Medicines Regulation, which the European Parliament’s Environment Committee adopted today, giving its consent to the trilogue agreement.

One of the main objectives of the Regulation is to fight the abuse of the use of antibiotics on farms, which are used particularly to boost animal performance. It suggests restricting the preventive use of antibiotics in veterinary medicine and drawing up a list of ‘critical’ antibiotics that can only be used in the field of human medicine.

The Regulation also encourages innovation in the area of antimicrobials through incentives such as longer periods of protection for the technical documentation of new drugs.

"The text adopted today is a concrete example of a Europe that protects its citizens. We cannot continue to impose standards on European breeders that our partners do not respect. It is time for Europe to make itself heard and to take firm world leadership in the fight against antimicrobial resistance."

"The European Citizens’ Initiative is by far the most attractive way for citizens to send their ideas and aspirations for change to the European Commission and the EU as a whole. The new regulations will make this smoother and more effective, and it only remains for the Commission to administer the ECI in a constructive spirit", said György Schöpflin MEP, author of the Report, after a reform of the European Citizens’ Initiative Regulation was adopted today by the Constitutional Affairs Committee.

The European Citizens' Initiative is a way for citizens to shape Europe by inviting the European Commission to make a legislative proposal. Once an initiative gathers 1 million signatures, the Commission decides on what follow-up action to take.

The main objective of the reform of the ECI Regulation is to enhance the effectiveness of the ECI, both in terms of making the tool more user-friendly and in terms of increasing its legitimacy. In order to enhance the trust in the ECI as an instrument of engagement of EU citizens, what the committee would like to see is a presumption that the Commission will submit a legislative act in response to a successful ECI within a year after its publication. Its decision not to submit a specific legislative proposal should be clearly and duly justified.

To ensure that the ECI achieves its full potential as a tool to foster debate, the committee wants the Parliament to be able to hold plenary debates, with the possibility of adopting a Motion for Resolution, to assess the actions taken by the Commission. To ensure its credibility, the Parliament is also pushing for increased transparency and accountability as regards support and the financing of the initiatives.

The deal will give us a modern and flexible Energy Union

“We managed to strike a good deal which will put the EU on track towards realising the Energy Union and building the European energy markets on competition and market-based price formation, which is crucial in order to spur innovation and investments in new technologies. At the same time, we will do our part in the global endeavour to tackle climate change”, said the EPP Group Spokesman in the European Parliament’s Industry Committee, Gunnar Hökmark MEP, after a deal on the Governance of the Energy Union was struck between the Council and the European Parliament.

The Governance of the Energy Union is crucial as it sets rules that will help Member States achieve the common energy and climate goals we set up in the EU for 2030 - for instance, the goal of 32 percent renewables and the 32.5 percent goal of energy savings. It will also contribute to reaching the goals set out in the Paris Climate Agreement.

"The Energy Union is on track and the text on its governance is there to pave the way. Collectively, we must reach the goals set out by the Paris Agreement. This late night agreement between the Parliament and the Council is a great success and represents a step forward in the right direction. We managed to set up an adapted framework for market actors, opening the field for the development of future energies", said the EPP Group Spokeswoman in the Environment Committee, Angélique Delahaye MEP.

The Governance of the Energy Union is the fourth of eight legislative files in the so-called Clean Energy Package, presented in November 2016, to reach agreement. The first - a revised Directive for Energy Performance of Buildings (EPBD) - was concluded in April 2018 and the second - the Renewable Energy Directive - was concluded in June 2018. The Third on Energy Efficiency was concluded this week.

The package is an important element in the plans to establish an Energy Union in Europe.

“The approval of the new Copyright Directive in the European Parliament’s Legal Affairs Committee today is a step forward in adapting the current European Union copyright rules so they better reflect the new realities and business models of the 21st century”, said the Parliament’s author of the Report Axel Voss MEP, the EPP Group Spokesman on legal affairs. The Legal Affairs Committee adopted the Directive on Copyright in the Digital Single Market, a file that had already been proposed by the European Commission back in 2016. The new Directive introduces new rules regarding publishers’ rights, addresses the problem of a value gap, as well as setting a text and data mining exception.

Following long-lasting negotiations, it seems that the long-awaited EU copyright reform is finally reaching its conclusion in the Parliament. The negotiated Directive addresses the problem of a so-called value gap in which internet online platforms bear no legal responsibility over the copyright-protected content that has been uploaded to their website by users. “There have been a lot of false rumours and misinterpretations over the so-called value gap. No-one is and no-one will ever filter the internet! We are addressing the issue that more and more infringements are appearing on internet platforms that have as a main purpose to share the works uploaded by its users. These platforms make a considerable profit on the works uploaded by its users, so they can’t simply hide behind the argument that it is the users who are uploading, while the platform is making money from it. But don’t be mistaken: platforms such as universities, scientific databases and online encyclopaedias, which do not deal with copyright content as their primary purpose, will be exempt from the new rules”, said Voss.

The new copyright reform also concerns press publishers, whose content is used by news aggregators to generate profit. “We support the line that press publishers need to receive a fair share for the use of their content on the internet, as most of the generated revenue at the moment goes to the news aggregators. I am happy that this right is now recognised. We want to strengthen the role of smaller publishing houses as they can now easily defend themselves against the big internet platforms and will have a better chance of receiving fair remuneration for their content. What is at stake is the survival of journalism and the protection of the quality of journalistic work. A wild world web where big platforms do not respect the copyright of publishers could end with thousands of journalists losing jobs. In 2013 alone, some 15,000 journalists lost their jobs because the press publishers are not being remunerated for the internet use of their products. This trend mustn’t continue”, he concluded.

Judicial power must be impartial and independent

“We express our serious concern and regret regarding the decision taken yesterday by the Chişinău Court to invalidate the local elections that took place in the capital of Moldova.

Elections are the cornerstone of any democratic regime. The results of the vote on 3 June should be fully respected as they reflect the political will of the citizens of Chişinău.

It is essential for the judicial power to be impartial and independent of any kind of political influence.

Moldova could deepen its cooperation with the European Union and pursue its European path only if democratic principles are respected, including strict separation of powers and the independence of the judiciary.” 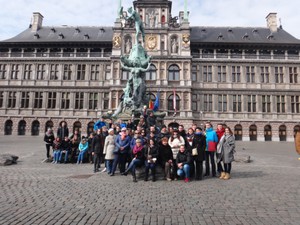