Europe cannot be a project of the elite only. We need to bring our people back on board. This will be EPP Group Chairman Manfred Weber's message on Tuesday to the Plenary during the debate on the future of Europe with the President of the French Republic, Emmanuel Macron. The Chairman will present his ideas giving the people a say in the Europe of tomorrow.

The recent Cambridge Analytica scandal has not only undermined European citizens' privacy, but has also put serious doubts on our democratic principles when it comes to free elections. On Thursday, Members of the European Parliament will discuss the latest developments and the way forward to ensure legal certainty for business development and growth. For the EPP Group, the privacy of individuals' data is the utmost priority. The Group will continue to put pressure on the responsible US authorities to take action against companies failing to comply with the Privacy Shield.

The EPP Group strongly condemns the murder of Slovak investigative journalist Ján Kuciak and his partner and is appalled by the fact that it is the second murder of a journalist in the EU in the past five months, following the brutal assassination in Malta on 16 October 2017 of journalist Daphne Caruana Galizia. In the Resolution, to be voted on Thursday, we call on the Slovak authorities to ensure a full, thorough and independent investigation that leads to the punishment of those responsible and ensure protection of investigative journalists from any form of attack.

The wars in Syria and in Eastern Ukraine, the hacker attacks on EU countries and the recent poison attack in the UK: during Wednesday’s debate on the conclusions of the last European Council in March, the EPP Group Chairman Manfred Weber will demand that Europe continues to confront Russia’s destabilisation efforts with a strong and united position. He will also point to the latest developments in the trade dispute with the United States.

The automotive industry makes up 6.4% of GDP and employs 12 million people - directly and indirectly - in the EU. In September 2015, the Dieselgate emissions scandal uncovered loopholes in the legislation on the implementation of type approval rules for cars in the EU which made the European Commission come up with a plan to strengthen the rules to avoid another Dieselgate. The Plenary will now approve the agreement on the new rules on Wednesday by putting in place a European Commission audit system for national type approval authorities as well as the obligation for the Commission to organise and carry out tests on vehicles, therefore greatly improving the current rules.

Terrorist attacks and financial innovations such as virtual currencies require updates to current laws. On Thursday, the Plenary will vote on new rules to prevent money laundering or terrorist financing which will impose stricter controls and improve cooperation between the Member States' authorities. "Criminal behaviour hasn't changed. They use anonymity to launder their illicit proceeds or finance terrorism. We have to make sure that the legislation addresses the threats to our citizens and the financial sector. This also means tightening up the rules regulating virtual currencies and anonymous prepaid cards", said Krišjānis Kariņš MEP, co-Rapporteur on behalf of the Economic and Monetary Affairs Committee. "These measures will certainly make Europe safer", said Emil Radev MEP, the EPP Group Shadow Rapporteur in Parliament's Justice and Home Affairs Committee.

MEPs will vote on Tuesday on a final agreement  between the European Commission, Council and Parliament, setting out binding annual greenhouse gas emission targets for Member States for the period 2021–2030. These targets cover sectors of the economy that fall outside the scope of the EU Emissions Trading System (ETS). The EPP Group believes this is an important step towards significantly reducing emissions since it takes into consideration sectors including transport, building, agriculture and waste management which account for almost 60% of total EU emissions. The proposal is the follow-up to the Effort Sharing Decision which established national emissions targets for Member States in the non-ETS sectors between 2013 and 2020.

Making more efficient use of energy in buildings

Today, buildings are responsible for 40% of energy consumption and 36% of CO2 emissions in the EU. Making a more efficient use of energy in them is one of the most effective ways to save energy and help the climate at the same time. The updated rules on Energy Performance of Buildings, to be approved on Tuesday by the Plenary, will improve the situation by focusing on incentives to upgrade the energy performance of old buildings, involving financing by the private sector. This is the first of eight legislative proposals in the so-called 'Clean Energy Package' - an important element in the Energy Union - to pass through Parliament.

On Tuesday, Plenary will vote on the final agreement concerning land use, land use change and forestry (LULUCF) in the 2030 climate and energy framework, reached between the Institutions in December. Scientists estimate that forests play a critical role in contributing to climate change. Their loss or simply changes to the use of land account for around 23% of current man-made CO2 emissions, which is 17% of the 100-year warming impact of all current greenhouse gas emissions. The EPP Group believes that every sector has to contribute to fighting climate change, sectors relating to land use and forestry included. This is the way to contribute to the goals set out in the Paris Climate Agreement.

The European Parliament will adopt the Waste Package on Wednesday which consists of four Reports and six Directives on waste management in the EU. The Waste Package sets clear targets for the reduction of waste and establishes an ambitious and credible long-term path for waste management and recycling. To ensure effective implementation, the waste reduction targets include concrete measures to address obstacles on the ground and the different situations across EU Member States. The EPP Group negotiator, Carl-Heinz Florenz MEP, stresses that the aim of the Waste Package is to stimulate the transition towards a circular economy, which will boost global competition, foster sustainable economic growth and generate new jobs. The EPP Group wants new businesses and innovations to grow from the Circular Economy Plan.

The European Parliament will debate the 2016 discharge procedure on Wednesday. Altogether, 53 Reports evaluate how EU money has been used and how the Union governance delivered its tasks. The EPP Group Rapporteurs are Joachim Zeller MEP on the Commission discharge and Brian Hayes MEP on the Joint Undertakings.

The EPP Group believes that vaccination is one of the most cost-effective public health measures available in Europe. However, despite, and perhaps because of vaccines' public health impact, an increasing number of parents and patients are choosing to delay or refuse vaccines. This is why the EPP Group will vote in favour of the Report on Thursday which calls on Member States to be more active in this domain.

Saturday: speeches at the congresses of the CDU Nordbaden and CDU Südbaden, Niefern-Öschelbronn and Denzlingen, Germany

Tuesday: speech in the plenary debate on the Future of Europe with the President of the French Republic, Emmanuel Macron, Strasbourg

Wednesday: speech in the debate on the conclusions of the last European Council meeting; meeting with Commissioner Stylianides

Tuesday @ 15.00 Norbert Lins MEP, Rapporteur, and others on 'Climate change: legislations on effort-sharing and LULUCF' 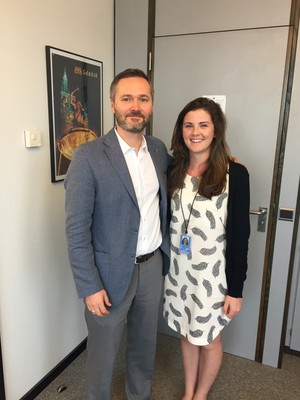 At the European Parliament, being an American is something of an anomaly. Not many people expect a young girl from Indiana to be working for a Polish MEP. Despite the anomaly of my position, the past four weeks working for Mr. Walesa have given me the opportunity to engage in politics at an international scale.