EU response to US duties on steel and aluminium imports

Members of the European Parliament will debate President Donald Trump’s plans to impose new US duties on steel and aluminium imports and the EU's response on Wednesday. "We believe that free and fair trade is to the benefit of the people. We believe in partnership and bridge-building. Therefore we deeply regret President Trump's announcement of tariffs on imported goods. The European Union does not want the conflict to escalate, but we will not accept this aggressive behaviour without reacting", said Manfred Weber MEP, Chairman of the EPP Group.

Brexit: future EU-UK relationship in form of an Association Agreement

In a Resolution to be voted on Wednesday, MEPs will propose a close relationship in the form of an 'association agreement' between the EU and the United Kingdom making it clear that the UK will become a third country after leaving the EU. The Resolution stresses that the integrity of the Internal Market and the four freedoms are non-negotiable. There can be no cherry-picking and no sector-by-sector approach. The EPP Group also wants to ensure that the commitments made with respect to Northern Ireland are fully enforceable. The Resolution also makes clear that during a potential transition phase, the UK will no longer take part in the EU's decision-making process, as it will have left the EU in accordance with its own decision. The transition phase requested by the UK can only be possible if there is agreement on the Withdrawal Treaty.

MEPs were in Bratislava (7-9 March) to gather information about the assassination of the Slovak journalist Ján Kuciak. The delegation met with the Slovak Prime Minister, several Ministers and anti-government journalists. "The murder raised concerns about corruption and safeguarding press freedom in EU countries. The case needs to be resolved", says EPP Group MEP Ingeborg Gräßle, Chairwoman of the Budgetary Control Committee, who was part of the delegation. Kuciak and his fiancée Martina Kušnírová were shot dead on February 25 at their home in Velka Maca. Kuciak's latest research evolved around possible connections between the Calabrian mafia 'Ndrangheta to the Slovak police. The Council and the Commission will make a statement on the issue in Plenary on Wednesday.

The European Parliament will vote on Wednesday on two key Reports presenting its position on the post-2020 Multiannual Financial Framework (MFF) and MEPs' recommendations on the reform of the Union's own resources. The EPP Group calls for an increase in the current 1% level of EU expenditure to 1.3% of the GNI of the EU-27. This allows the continuation of support at the current level for agriculture and cohesion policies, while providing for additional funding to deal with new challenges such as security, defence or migration. After 2020, the EPP Group advocates for new EU own resources that will decrease the level of national contributions to the EU budget and, thus, the logic of “juste retour” that has prevailed in budgetary debates in the Council. All  rebates and corrections on the revenue side of the budget should be abolished.The two draft Reports provide the Parliament’s input to the Commission’s legislative proposals on these matters due in May 2018.

Towards the harmonisation of taxable profit in EU

MEPs will debate creating a single corporate tax base in the EU on Wednesday. Two complementary pieces of legislation: the Common Corporate Tax Base (CCTB) and the Common Consolidated Corporate Tax Base (CCCTB) will be voted on Thursday. The new rules aim at harmonising the definition of taxable profit across the EU’s Member States and also to establish a system to redistribute corporate tax revenue between EU countries. The proposals will allow taxation on wealth where it is created, allowing businesses to evolve into a more equitable and transparent system.On the initiative of the EPP Group, the European Parliament is the first EU Institution to come forward with a concrete plan to tax digital giants such as Google, Facebook and Amazon.

MEPs will approve the European Defence Industrial Development Programme on Tuesday that is aimed at cross-EU country development of EU defence capabilities, for instance drones for military use or a European cyber defence mechanism. €500 million will be allocated in 2019 and 2020 for the programme. The amount should increase to one billion Euros per year from 2021 and, in the future, increased pan-EU cooperation in the big weapons systems - aircraft, battle tanks, and navy ships - could and should be foreseen. “This is a ground-breaking way of thinking in the development of our defence capabilities and it is an important step towards a European Defence Union”, Françoise Grossetête MEP, the Rapporteur said.

Affordable parcel delivery for all

The Plenary will debate on Monday and vote on Tuesday on an ambitious reform to make prices of parcel delivery in Europe more transparent and more affordable for citizens and businesses. With the digital market booming, parcel deliveries across Europe already count for more than 4 billion parcels every year. Markus Ferber MEP strongly advocates a balanced approach between competition and regulation as too much regulation would slow down the growing digital economy at the expense of jobs and would result in higher prices for customers.

On Monday, the Parliament’s Environment Committee will vote on the legislative proposal cementing in law the decision to relocate a London-based European Medicines Agency (EMA) to Amsterdam due to Brexit. The EPP Group believes that the work of the Agency has to continue without any interruptions. At the same time, it is important for the EPP Group to be guaranteed that in any potential similar scenario in the future, the European Parliament will not be excluded from the co-decision process. The Plenary vote will follow on Thursday.

The European Commission will respond on Wednesday to an Oral Question posed by Agriculture and International Trade Committee Members on the planned course of action following the imposition of new tariffs by the US on imports of Spanish olives. The Resolution will be voted on Thursday.

Weds: plenary speech on US decision to impose tariffs on steel and aluminium; plenary speech during debate with Portuguese PM, Antonio Costa, on the Future of Europe; meeting with EU Commissioner Tibor Navracsics, all Strasbourg

Wednesday @ 15.30 Giovanni La Via MEP, Rapporteur, on the relocation of the European Medicines Agency 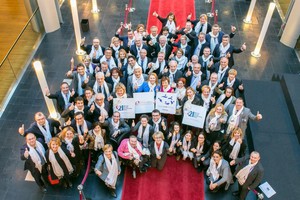